Since we first began importing FMB tires in 2014, we've received countless questions every season from both new and experienced cyclocross-ers trying to decipher the FMB lingo and choose the best tires to get them through the season. And we get it. With two tread compounds and two sidewall options for each of the four tread patterns offered, there’s a lot to consider. Every specification- whether it’s tread compound, pattern, or sidewall material- has conditions in which it shines the brightest. We’ll break it down for you so you can get back to barrier practice!

Anyone who has had their eyes on the cyclocross scene over the past few decades will easily recognize FMB’s green-treaded tires as inspired by the famed, but long discontinued, Michelin Mud. Prior to FMB’s revival of Silica tread in 2015, pros have hunted down the last of the clincher-only Michelin Mud to have the tread attached to tubular casings. 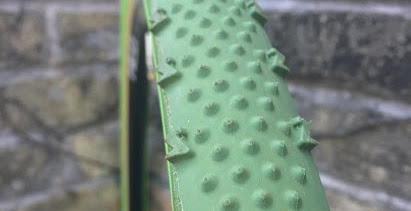 What’s all the hype about? The biggest advantage of the Silica tread compound is that it maintains traction in extremely low temperatures better than standard rubber tread. Those living in dry or more temperate regions will likely not see the benefit, but it can be a great late-season option for anyone in the Midwest or Northeast once the ground freezes and you’re racing in single-digit temperatures. Because this compound lacks the agent carbon black, which is added by manufacturers to increase a tire’s durability (as well as added softness and color), like all colored treads, they should wear faster. Interestingly enough, this isn’t an issue we see often in practice. Most riders are getting just as much life out of their Silica-treaded tires as their black sets.

A disadvantage of Silica is that it is less supple than its rubber counterpart, again due to the lack of carbon black in the compound. Being more stiff, it bites into frozen ground or hardpack more easily than soft rubber, but riders who prefer a more supple ride may find it slightly more slow-rolling than expected, especially if paired with the PRO Casing.

Tubular tires' cotton casing has long been a dread of pro (and home) mechanics, for the fact that they must typically be treated with Aquaseal to prevent dry-rotting as a result of the excessive washing that any cyclocross bike will be subjected to throughout the season. Fortunately, this is not the case with FMB’s cotton casing. They are factory-sealed, making them virtually maintenance-free all season long. Because these tires are handmade with natural fibers, the weave is tighter and more flexible, but also lighter. Many riders find that they can ride several PSI lower on FMB tires with cotton casing than on their previous tire. For anyone who likes to take advantage of the added traction afforded by low tire pressures, cotton casing will be your best choice! One of the most common concerns we hear about these tires is when riders find that their cotton casing becomes “sticky” at some point. This is not a defect, but typically a side effect of storage in damp conditions (like a garage), or washing with detergents (we recommend using only water on your tires!).

Almost everyone loves the pop of color that FMB’s PRO casing adds to their bike. For some, that’s all that really matters. But it does have a function! The signature PRO Casing is a protective latex coating applied to the sidewalls of the tire, available in green, pink, and a Belgianwerkx-exclusive blue. If a race course includes rocky sections, we opt for PRO casing. While the added protection against cuts is appreciated by most riders, we don’t recommend this casing to those who like to run very low pressures. The latex layer adds a little more structure to the tire, which takes away some of its suppleness and prevents it from folding over in the corners.

Which Tread Pattern for Which Conditions?

Super Mud: The name says it all. By far our best-seller every season, this aggressive mud tire powers through the mud, and sheds it just as quickly. While experienced riders often complain that it gives “too much grip” to use in all conditions, less-experienced riders (or anyone whose technical skills could use a boost) often find confidence in the corners on this tread pattern. When someone has only one wheelset for cyclocross, we’ll usually glue a Super Mud on the front tire, and a Slalom on the rear for a great all-conditions pair. If a third wheel (rear) is an option, another Super Mud is almost always the top priority.

Slalom: A close runner-up to the Super Mud, Slalom is an all-conditions tread. If you’re a fair-weather racer, this may be the only set you need. For anyone else, you’ll probably find yourself reaching for your Slaloms in the dry early-season races. An alternative to the above-mentioned solution for people who have only one set of wheels is to have a set of Slaloms for the first have of the season, and mount Super Muds as soon as the weather turns.

Grippo S: The “S” is for speed. Newest to the FMB family, Grippo S was first released last year. While it is decidedly a mud tire, it wouldn’t be too far of a stretch to use it as part of an all-conditions set up. This tread pattern is best suited to tackle the deep, soupy mud that’s more typical of late-season races. When comparing it side-by-side with a more aggressive tire like the Super Mud, you’ll notice that the knobs are a bit more widely spaced. While this helps optimize its mud-shedding abilities, if sloppy conditions aren’t your specialty, you may want to consider opting to the Super Mud, at least as a front tire. 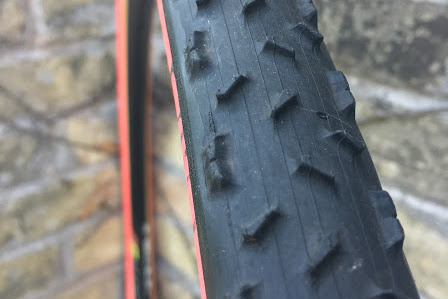 Sprint: The Sprint file tread is a super fast tire for very specific conditions. As Nick can often be heard saying, “you can have a Sprint if you’re Sven Nys, but even then, only on the back”. While that may be a bit of an exaggeration, he’s not entirely wrong. It takes a lot of skill to be able to successfully run a pair of file treads on the full length of any course. For most people in most places, a Sprint on the rear with give you more than enough speed on the driest, dustiest course of the season. But if you’re racing in the Southwest, they may be your go-to!

We find that File treads like the Sprint can also be a good choice when the course is hard-packed with snow or ice. The little knobs of tread on the side can have just enough bite to keep you upright without slowing you down.