The start of my second road race for the season was very different from my first, the week before. As Wisconsin weather goes cold and rainy one week and the next, this weekend, it’s hot and sunny. This time I was ready to race, with the experience I gained from the beginning of the road season and the nice weather for the day made me extra excited. However, I woke up a little late and only had a doughnut and a cup of orange juice for fuel.

The course at first seemed like it wouldn’t suit me doing well with it’s 250 meter slightly downhill finish but there was a delightful hill after the second turn that was steep at first and turned into a longer false flat with a small punchy riser at the end. Perfect for a lightweight rider like myself to use to my advantage.

The race field was a good size, about 30 people but there was a calm casualness in the pace of the group. I saw a lone rider go off the front with no one responding in the slightest. I waited till he was about 15 seconds out and took off to join him hoping that one or two more riders would follow with me. Fortunately, I brought one rider with me and we formed a well functioning break of three, before the second lap we were out of sight from the main group. For the next lap-and-a-half we worked like a well-oiled machine. I would take the pace up the hills and the two bigger guys would lead us down the descents and along the flats.

Before the third lap we lost one of the riders and there were down to only two of us in the break. For some unknown reason the other rider wanted me to up the pace on the hill and I started to lose him on the false flat. I had the decision of easing my pace and letting him catch up or burning a match and attempting to go solo for what would be at least a 40-minute sufferfest. For some reason I took option two without much of a thought, I was feeling good and didn’t want to slow down.

Right at the end of the third lap the group caught me and I was folded back in. I found my teammate, Rob, and decided that I would settle in and recover to try and lead him out on the final sprint (Rob had already won a few of the bunch sprints this season). The pace was once again slowed and I settled into the front 5-8 riders taking turns out front but not pushing the pace. I knew that the main sprinters wanted it slow on the hills to save themselves so; in the last half of the last lap I moved to the front and started driving the pace up the rolling hills and coasting down them. I noticed coasting down the second to last hill that I had some distance off the front. I drilled the last hill hard and pushed down the descent as hard as I could hoping to force some of the riders to burn matches to catch me on the ensuing flat. They did and I got with my teammate to prep for the finish. As I saw the descent to the finish approaching I noticed that no one was eager to up the pace. I decided that I would take it up hoping that Rob would be on my wheel and ready to go.

At this point I was exhausted, I burned three matches (I didn’t think I had anything left) and was ready to sacrifice myself to get a teammate on top. I snapped off the front to get the final sprint started. Midway though my lead-out I noticed that no one was coming around me and then it hit me; I could win this. I dug deep, super deep, gave the strongest kick I could muster and made it across the finish first. I couldn’t believe it, my first win of the season (Rob got third place too!). 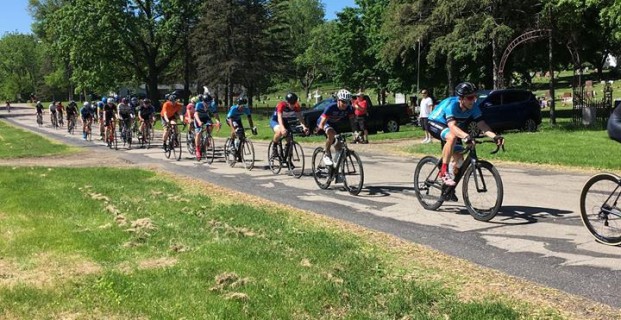