I enjoy a crit as much as anyone, but Road Races have an special place on racing for me, because they combine both longer distances (not that long around here) and speed.The LAPT Road Race is mostly flat with a couple of tiny kickers (one really close to the finish line). The first 10 min were intense, with a good turn out we had a few teams of considerable size (Trek Midwest, Valocause, LAPT, Brazen Dropouts) and attacks were constant during the first lap. I was cursed with lonliness and had to do a fair amount of chasing and stay close to the front, while also trying to make a break stick. Closer to the middle of the race one of the Brazen Dropouts broke away, while I was chilling close to the back of the pack. I realized this had happened a couple of minutes later when I saw him at the top of one of the kickers. Finally I made my way to the front and with the help of mostly Velocause we got the solo break back after around 5 miles. During the last lap there were minor attacks but I mostly focused on following wheels and recover as much as I could for the imminent sprint finish. This is sprint is divided in two: from the last corner to the top of the last kicker, and from the top of the kicker to the finish line. Many people died off mid climb and this created a ripple effect that made a few of us work extra hard in order to avoid slowing ride and crashes. I ended 7th but it was so tight that I was just a bike length behind the winner. I was told that the 4/5s the winner was teammate Rob.

This one had a ‘hill’ (more like a long leg burner) and it was really hot. From my previous experience with this race I knew I wanted to get to the finish line with the list amount of people possible because the sprint finish is after a long downhill and it gets really fast and messy. Again, the first lap was plagued by attacks. I tried to get away on the top of the hill with one of the GVDC riders, but the field was fast to chase us. Many attacks came in succession after that, but nothing was sticking. Pace went down and we were mostly out for a Saturday ride for a while. Finally during the third time up the hill my same GVDC break attempt attacked from the bottom of the hill. One of the Trek employees and I got after him and at the top we had a good gap, but starting to work together was hard after the effort. We managed to start moving fast but little groups from the bunch came back to us, finally around 10-12 of us were together, an actual break was established. We started a good pace line and kept a high pace. Next time up the hill there was another attack and a solo rider went up the road, we kept working together and during the last lap we didn’t only catch the solo break but we caught the break of the master 35+ 2/3s, this basically undo the break creating because suddenly we were a bigger group again. The official informed us that we all would finish as a group since the downhill and finish line were not too far away. The approach to the finish line was fast and confusing because you didn’t know who to follow or where to put yourself in the bunch. After a timid sprint I managed a 7th place again. Fun fact: teammate Ross Ford was on the 2/3s field we caught and also finished 7th. I was told that the 4/5 field saw a sandwich podium with David (who was on a long break that was caught on the last lap) taking 1st and Rob taking 3rd. 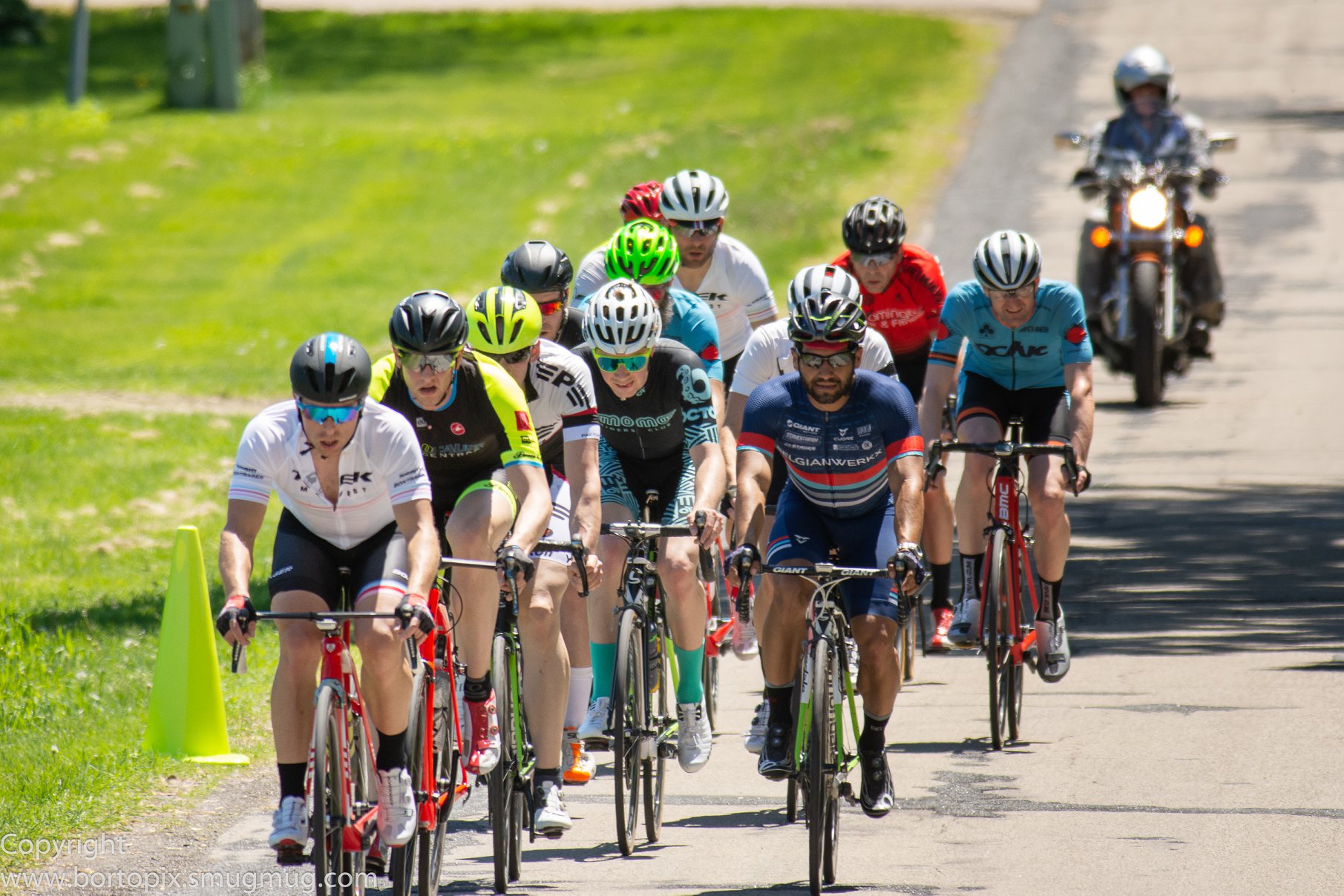